In March of 2018, the United States Department of State, through its Art in Embassies Program, sent me on a cultural exchange to Papua New Guinea and Solomon Islands.  Here is a summary of that experience.

We connected with the State Department curator Welmoed Laanstra in Sydney and from there traveled together to Port Moresby, PNG.  The already twenty-hour flight to Sydney was just the beginning, as we then traveled an hour and a half to Brisbane then another three hours to Port Moresby.  These are some of the most remote places left in the world.  Upon hitting the ground, the State Department van (where most of our time was spent because it’s too dangerous to walk anywhere) picked us up and drove us along muddy roads where throngs of people took shelter under the shade of trees and waded in the drain ways.  I quickly learned of the eighty percent unemployment rate that burdens the people, lack of access to healthcare and struggle to maintain cultural heritage.  I learned that there are 880 tribes in PNG, all with their individual languages and tribal histories vastly distinguishing them from each other.  Most are patriarchal, a handful are matriarchal.  Port Moresby is the capital city, where they all come together in search of jobs or any kind of living to be made.


I learned the term Wantok, which is Tok-Pisin (pidgin) for “one-talk”.  When a person identifies another person from their region or tribe walking along the road, they’d say ‘Oh, there’s a Wantok.’  Although their interpretation is much more specific, I liken it to when we identify our "peeps”.  In Papua New Guinea, though, it’s tied to language, tribal communion, and obvious, identifiable physiognomy.  Each tribe looks so distinctly different from the next.

I also learned that Papua New Guinea and the Solomon Islands still live with immense violence against women.  This is mainly why I’d been sent:  to demonstrate female empowerment.  What I underestimated, though, was the power of Bo traveling along with me as he lent a hand to my curriculum.  Several women commented on this model of equality in relationship and were struck by the behavior of a man assisting a woman, a wife, who was very much in charge.

Port Moresby rates in the top few unlivable cities in the world.  This has to do with the street gangs called Raskols who plague the streets and homes with violence.  I, however, found the people of PNG to be the most tender-hearted, kindest, industrious, eager and appreciative people I’ve ever met.  It was explained to me that art is not something separate from life.  Their ancestors have lived so seamlessly in tandem to art and making of crafts that it has been an inherent absolute passed down through time.

One thing I knew going into this teaching opportunity was that my approach was not going to be imperial.  I wholeheartedly disagree with sweeping in and laminating cultural principles upon another culture.  Instead, my approach was egalitarian.  And even that approach sparked some interesting response.  A few artists later told me that they came to class with the expectation that this American, and the U.S. government was going to give them the answers.  But as I centered the dialogue around common struggles, common aspirations (and from there found teaching opportunities), they realized the answers lie in industriousness, practice and creative problem-solving. 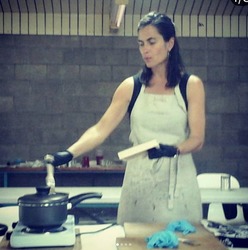 Art is a spiritual currency.  Art transcends borders and language, allowing access to our greater, aspirational selves.  The African proverb goes, “when you pray, move your feet.” Well, when hands and minds come together in common pursuit of art, transformational shifts happen in hearts and minds.

Working with artists in Papua New Guinea and the Solomon Islands, connecting artist to artist, communicating common dreams, common pursuits, and common struggles through a combination of hands-on encaustic master classes, powerpoint presentations and lessons on critical and creative thinking, I witnessed a palpable shift in the artists’s relationship to the world.  Through the universal language of creativity, my goal was to explore the frequencies of personal, human emotion, validating the lives and stories of each individual.  Through this discovery of one’s inner-agency, the unconscious can be sublimated and cultural heritage can continue to evolve and flourish.

In Papua New Guinea, in particular, the reality of commodities extraction is part of their everyday reality.  Through television and radio interviews arranged by the embassy staff, I was able to vocalize the importance of honoring not only the obvious commodities of energy and minerals but the creative capital so prevalent in these cultures.  I emphasized that artists are the poets and prophets, and it is through their creations that visitors and the world come to understand their unique culture and traditions.

Female empowerment was the main focus of this trip.  In a part of the world where domestic violence, specifically violence against women, is the norm, my goal was to help women access their inherent powers of creativity, organization, critical thinking and industriousness.  The success of this cultural exchange couldn’t have been more obvious as one woman shared with the group, ‘This class was the turning point of my life.  No woman has ever talked to me the way you talked to me; now I know I can do anything and pursue my dreams.’ 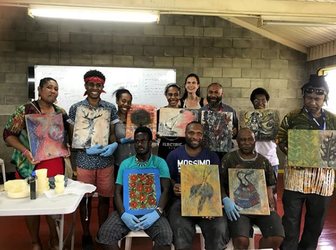